Autobahn drivers may be optional, Bloomberg reported yesterday, only minutes after Germany’s Transportation Ministry spokesman Ingo Strater told media outlets of a freshly-drawn plan to allocate a section of the A9 autobahn –connecting Munich to Berlin– as a guinea pig in a push to expand driverless-car projects into real-life. Flamboyant, futuristic efforts to transform the current transportation landscape may well be headed in the same direction as green energy projects: for a long time the blueprints were way off the mark, then suddenly turning into reality all over the world. And, as it happened in the renewables energy field, it may help that those “idealistic” pursuance turned into reality as they got into mainstream and into businesses balance sheets.

Google autonomous cars have been humming down California roads for quite a while. Audi have gushed over its driverless RS 7 car that can do so even at racing speeds on a race track. Mercedes-Benz introduced a limo at Las Vegas CES with seats enabling driver and passengers facing each other, more reminiscent of Queen Victoria’s carriages than Margaret Thatcher’s Bentleys. Not as much likely to disrupt our view of future, but most likely bound to hit the market for good sooner than other projects, were other recent samples of innovation prowess that rely on public sector only as far as regulation is involved, such as fully automated remote valet parking demonstrated last month at Las vegas CES with a laser-equipped BMW i3 connected to a Samsung Gear S smartwatch.

Yet the public sector is taking notice, especially in countries such as Germany where carmakers are at the forefront of the economy growth. Therefore it’s not surprising that referring to autonomuos cars Mr. Strater told reporters: “The German auto industry has recognized that this field is developing. We want to support that”.

Which brings us to Alexander Hamilton. Lately I’ve found a couple of interesting posts related to this U.S. founding father: here I’ll draw from Bloomberg View’s Justin Fox, who highlights the never-ending American dicotomy between Hamiltonians and Jeffersonians route to economic success. “In one view, let’s call it the Hamiltonian, big business and government work together to achieve national prosperity and greatness”, writes Fox. On contrary, the Jeffersonians call for government to stay out of the way and see prosperity hinge on entrepreneurship and start-ups rather than on infrastructure and networks.

The major overhaul that the transportation scenario is currently undergoing seem to shift the balance in the direction of Hamiltonians after a long Jeffersonian policy prevalence that dates back from the 1980s. It seems likely, therefore, that interplay between big business and government, at national, local or supra-national (especially in Europe) is set to grow. And it’s not a game confined from a country such as Germany where infrastructure needs upgrading, far from it. 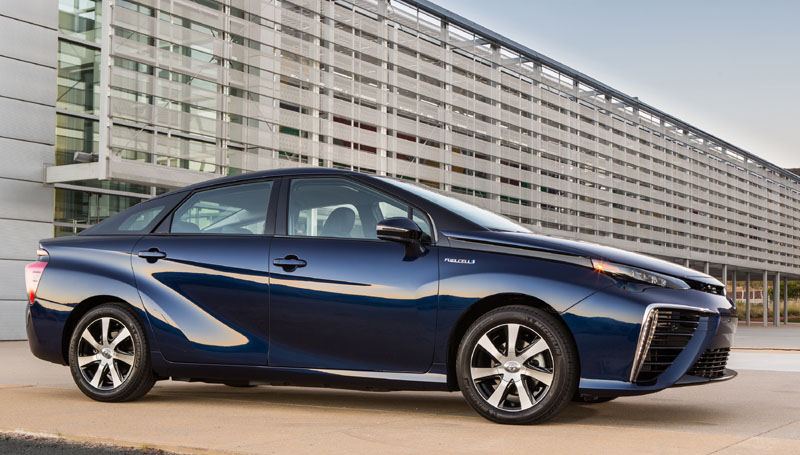 You don’t even need to change industry, although the breakthrough we talk about may change. In Japan Toyota has just announced decided to boost production of its Mirai hydrogen fuel cell car (pictured above): the first 1,500-car batch production has surprisingly received a keen response from the word go. Yet the early demand is the result of extraordinary subsidies that Japanese buyers receive both from national and local government, respectively with $17,000 and $8,500 incentives (the car reportedly will cost $57,500 in the U.S.) in a push to make Tokyo traffic green and clean on time for the 2020 Olympics.

Innovation often requires different facilities and infrastructure: hydrogen refueling stations seem to be the hardest part to come about in the race to the future of transportation. It’s a kind of problem that previously condemned alternatives to fossil fuel tranpsortation, but a challenge this time out big business, rather than startt-ups are taking head-on. Take a former start-upper like Elon Musk: his Tesla is expanding its network of supercharger stations in UK and Switzerland, in order to meet the demand of affluent people that makes the most of the young electric car brand portfolio. Tesla has more than 300 Supercharger stations with over 1600 Superchargers worldwide, making it both the largest and the fastest-growing fast-charging network in the world. In Europe, there are 123 Supercharger stations with over 660 Superchargers.

The American electric carmaker moves (above Maidstone in Kent, UK) seem to vindicate Jeffersonians as –unlike Germany’s highway project that encompasses national carmaker and public sector– it is part of business plan unfolding. However, UK Tesla customers, and taxpayers too, may be interested to know that at least part of the current projects have been supported by taxpayers on the other side of the Big Pond. Mr. Musk had the chance to see U.S. states bidding to host Tesla (and Panasonic) ground-breaking Gigafactory project aimed at turning car batteries into a efficient and cheap commodity.

The $5 billion project is underway in the Nevada desert courtesy of $1.25 billion in tax breaks that the American state awarded to the new venture. Basically Tesla and Panasonic will operate in the Western state for ten years tax-free, a bonanza offset by 6,500 jobs arriving in the Reno area and many more likely, wrote USA Today here.

In short the pendulum is shifting in the direction of Hamiltons’ and big business and government aren’t anymore afraid to make deals, even compromises, rather than the latter backing over backwards to make the former happy. It’s a time when as the NYT reminded us here, even Republican governors buck the party line when it comes to taxes, breaking lunatic pledges fo the sake of Grover Norqvist as the time to replace and fix crumbling infrastructure is ticking.

(we know, we know, Washington state has been bizarrely been “merged” with Maryland…)

Many Italians, wary of the mess of graft and waste that was often triggered here by the knots between big businesses, especially in construction and public works industry, and government regulators may not deem this like a turn for the better. As it is, paradoxically in Italy red tape meant black ink in the balance sheet of a few firms, as the disenheartening book of Bocconi professor Francesco Giavazzi and journalist Giorgio Barbieri “Corruzione a norma di legge” (strictly legit corruption) reminded us.

But even the balance-budget obsessed German surrendered to the call of new growth opportunities that seem able to merge innovation and infrastructure, and it may turn out self-damaging as much as austerity to say no to any forthcoming corporate opportunity for the sake of righteous probity. As the growth “weather forecast” switches to fair, let the wind blow and leave it to the Captains take care of the state of their sails…